In Brazil, I learned about a new drink called Caipirinha.  It is alcoholic but made from sugar cane! Here’s the description:

Caipirinha (Portuguese pronunciation: [kajpiˈɾĩɲɐ]) is Brazil‘s national cocktail, made with cachaça (pronounced: [kaˈʃasɐ]) (sugar cane rum), sugar and lime.[1] Cachaça is Brazil’s most common distilled alcoholic beverage (also known as Pinga orCaninha). Both rum and cachaça are made from sugar cane-derived products. Specifically with cachaça, the alcohol results from the fermentation of sugar cane juice that is afterwards distilled.

Here’s a picture that I took, a glass of Caipirinha that I ordered.  How did it taste?  Pretty sweet…therefore I like it! 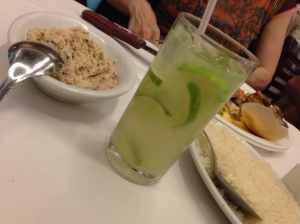 How to make Caipirinha?  Although I am not interested to make it at home, I think some of my readers may be interested.  Here I found this video on You-Tube:

How to make a Caipirinha:

The next Brazilian food that I would like to feature here is charrascaria.

A churrascaria (Portuguese pronunciation: [ʃuʁaskaˈɾi.ɐ]) is a place where meat is is cooked in Churrasco style, which translates roughly from the Portuguese for ‘barbecue‘.In modern restaurants rodízio service is typically offered. Passadores (meat waiters) come to the table with knives and a skewer, on which are speared various kinds of meat, be it beef, pork, filet mignon, lamb, chicken, duck, ham (and pineapple),sausage, fish, or any other sort of local cut of meat.

Although basically I don’t eat too much eat, the churrascaria experience in Brazil was better than the ones that I had in San Francisco.  I went to a churrascaria in SF after the trip with some colleagues who were interested in this kind of food.  It was a disaster!  I had been there before, but it was better, because it was long before this trip!  It  was incomparable to the meat that we ate in Brazil!  It was much fresher and tasted better there.  Never again, in SF!

Here’s a picture I took in a restaurant in Rio de Janeiro.  The salad bar was pretty good too, luckily for the vegetarians! 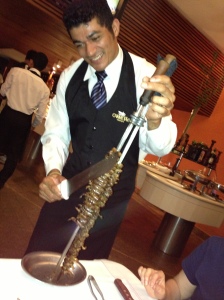 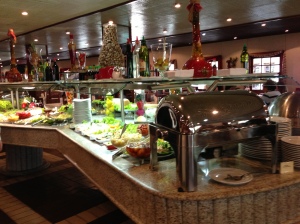 Although I am not really a big meat-eater, I am interested to know how to grill churrascaria-style.  I found this video on you-tube quite interesting and helpful.

A _churrascaria is an all-you-can-eat Brazilian steak house that features an amazing array of spit-roasted meats. Recreate the experience at home with these tips.

Being a coffee drinker, I have to say that Brazilian coffee is one of the best coffee I ever tasted.  In Brazil, drink coffee, folks!

Coconut water is the clear liquid inside young coconuts (fruits of the coconut palm). In early development, it serves as a suspension for the endosperm of the coconut during their nuclear phase of development. As growth continues, the endosperm mature into their cellular phase and deposit into the rind of the coconut meat.[1] Coconut water has long been a popular drink in the tropics, especially in India,Brazilian Coast, Southeast Asia, Pacific Islands, Africa, and the Caribbean, where it is available fresh, canned, or bottled. 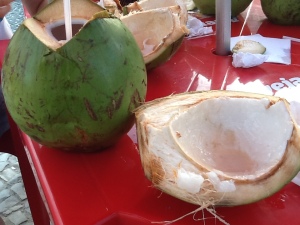 On my post  about Copacabana Beach in my other Blog “My Notebook”, I mentioned about drinking fresh coconut water at the Copacabana Beach. From the picture posted above, you can see how thick is the” flesh” inside the coconut.  Not only was the coconut water refreshing, the “flesh” was so fresh that none of us had ever tasted or eaten before in other places.  I did try a similar coconut water in Cambodia.  It was not as good as this one.  So if you ever go to Rio de Janeiro, find the Copacabana Beach.  You will see some stands near the beach.  Don’t be shy to ask the staff there to cut open the coconut for you. Otherwise you would not be able to try the “flesh” inside.

I did not actually see how the coconut was cut, but I found this video on you-tube.  Isn’t it interesting?

(How to cut open a young coconut? This video is about cutting a coconut in Copacabana Beach in Rio de Janeiro) 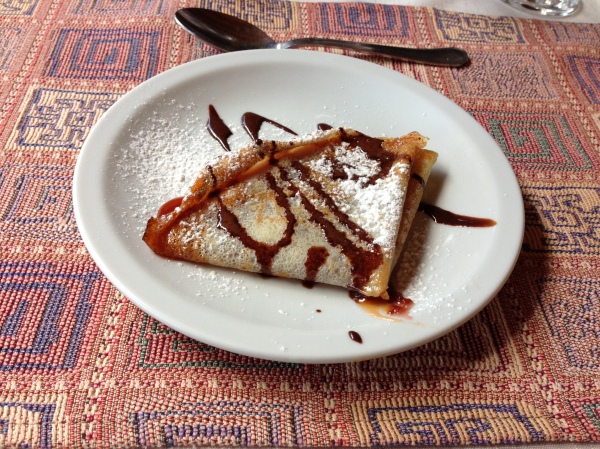 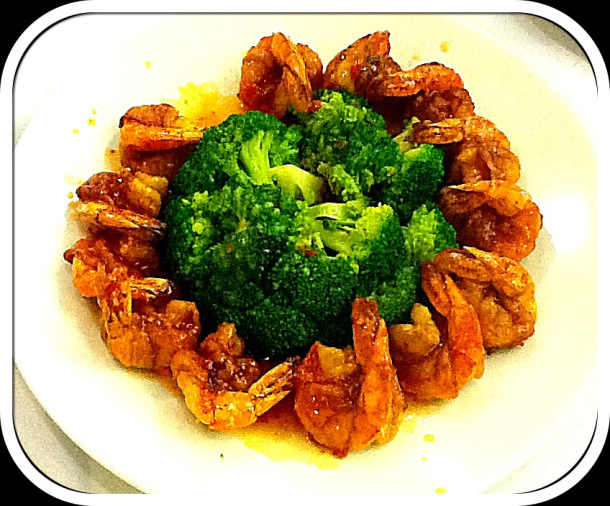